Our approach is to develop research that provides pragmatic guidance for change agents.

Our approach is to work with vendor clients to engage their customers and help them to articulate and share their best practice methods and approaches.

As we develop guidance in different areas we will open up new tabs. 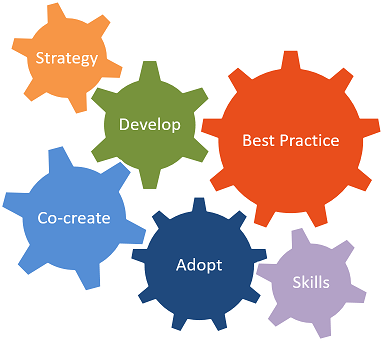 Rewiring The Robots In Your Organization

Although not immediately apparent, most organizations already employ an army of robots. Their job is to smooth over the cracks between the organization’s “heritage” systems and the needs of its customers. They’re called employees.

Wake Up To The Future Of Work—Operational Performance Management

Despite their best intentions, enterprises still don't have effective control of their processes. Given an aging workforce and increased compliance responsibilities, firms need greater transparency and better accountability; systems are still antiquated/archaic and not equipped to give them visibility into process performance. Updating and reinterpreting the core tenets of Operational Performance Management for the cloud era provides firms with an effective framework going forward.

If you are interested in exloring how we might help your organization develop its own set of Best Practice stories, please contact Derek Miers. (derek.miers @ structuretalent.com)